Control all functions of your external monitor with a click on your (wireless) keyboard! Lower brightness, switch input, raise contrast or switch power modes with Python and Monitorcontrol.

Eye strain is probably one of the most bothering things for people working on computers all day long. While blue light reduction is a key to less fatigue, I personally tend to adjust either my laptop’s or my monitor’s brightness a lot.

If you’re on Windows and don’t have monitor program yet, definitely check out the Monitorian GUI. Easy to use and it simply works out of the box. Similar programs are available for macOS and Linux.

While the GUI already offers a nice widget with a brightness slider, it’s not effective enough. I prefer keyboard shortcuts and hence used my keyboard’s software to trigger a Python script either lowering or raising brightness by 5%. One could use native shortcut combinations, e.g. shift+l for lower but in my case I use the additional custom keys and proprietary software of my bluetooth keyboard.

Logitech Options is the accompanying software for the recent (as of 2021/22) keyboard and mouse series. Unfortunately they don’t offer Linux support and no direct command execution. However, if you installed Python and Monitorcontrol globally, Windows will recognize the .py extension and simply execute it with Python as it’s supposed to.

If it doesn’t work, you could compile the tiny scripts with pyinstaller to an .exe file and execute it just like any other Windows program. 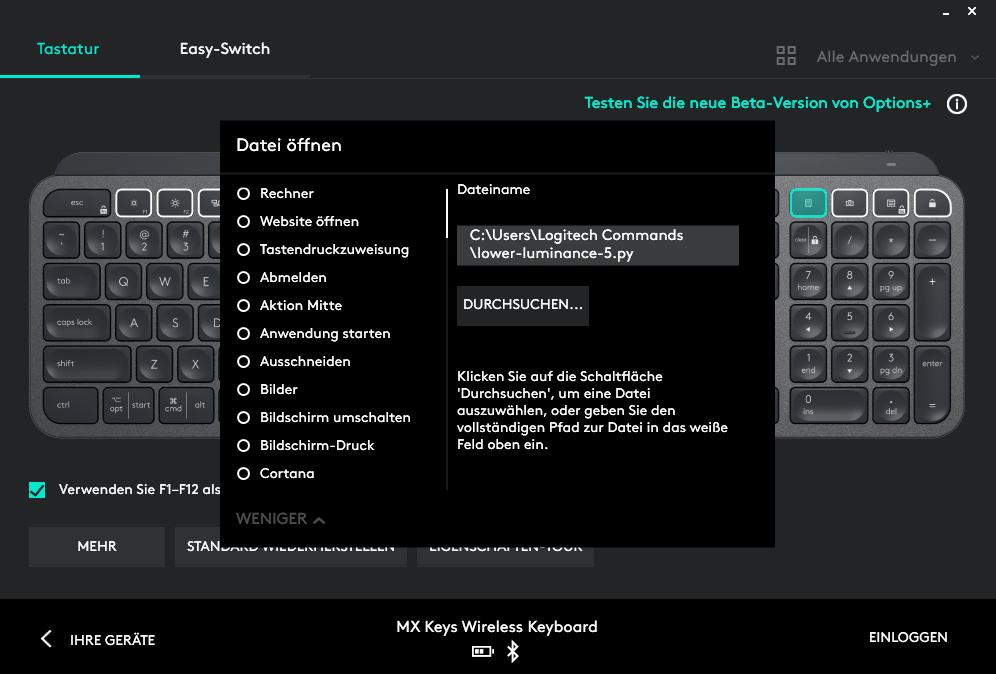 Dimmer is a fantastic tool for additional screen dimming. It’s only a black filter and does not physically dim but helps if you need to go beyond the screen’s limits.